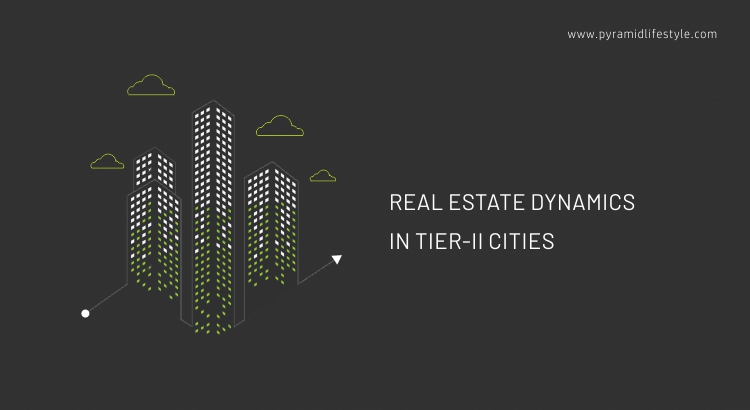 With a population of 1.3 billion people, India’s real estate industry has been booming like never before. As Indians are attempting to fulfill their basics of food, shelter and clothing, the real estate industry has stood tall by bridging the gap between demand and supply efficiently. It’s a thing of appreciation for how the industry operates differently in different parts of the country. In this article, we are going to have a look at how real estate companies change their dynamics owing to a different set of essentials in different cities.

Indian cities are normally categorized into three tiers depending upon the population density of that particular city.

Tier-I cities with a population of more than 10,000,00 are categorized under Tier-I which includes cities like Delhi, Mumbai, Pune, Ahmedabad and Bengaluru.

Tier-II cities with population 50,000 to 99,999 are categorized under Tier-II with cities like Hyderabad, Nagpur, Indore, and more.

Tier-II cities and the changing dynamics

Tier-II cities perfectly fit in for what we would call as ‘Future Cities’. These cities carry the real essence of India on the threads of culture and traditions. The nation with 22+ languages and a matchless legacy, has all its roots nicely guarded in such cities that now thrive on the old and the new. As development is paving its way to such cities from metropolitan cities, the scope of growth and modification is limitless. There are many advantages which make Tier-II cities as favourites and one of the basic reasons is – elimination of errors. Where suburbs are getting cramped due to less space and unplanned construction, Tier-II cities are easily able to dodge whatever problems Tier I cities are facing to get ready for the future.

Modern social infrastructure is coming to Tier-II cities making them stand in balance with the old and the newness of life. Big multinationals are eyeing to set up their bases in such cities owing to less pollution, proper planning and limitless scope for development. These cities also stand as an experimental ground for many projects which Tier I cities fail at due to lack of space or other reasons. The government has been well aware and conscious about such cities as they would become the platform for India to thrive in the years to come.

Tier-II cities are preparing themselves for what could be called as ‘perfection’. Where heavy traffic in modern cities have been a deterrent for essential construction such as metros, new roads and flyovers, Tier-II cities are changing their gears early on by preparing all the social infrastructure to avoid the chaos and stand future-ready.

This has in turn given the real estate industry a surge that is essential to outdo their own selves with more ease and poise. Renowned names of the real estate industry have already started occupying lands in such cities which promise to host future like no other. As few years down the line, things would get more intense, these cities are adapting rapidly to the demand that would arise in the future. For instance, Nagpur – the centre of India which plans to develop its dream project – MIHAN SEZ in the future, is already equipped the much-required metro connectivity across the city. Such planning and execution in advance help overcome problems of construction during busy hours of work. Quite like the way, many other cities have proposed many such projects.

At Pyramid Lifestyle, we have always been keen towards spotting strategic locations in Tier-II cities and have already marked such locations that would stand very significant in the coming future. The game is just not about locating such strategic locations but it also about developing them in an ingenious way. Pyramid Lifestyle promises to deliver matchless projects in such cities where the game solely would be to enhance your lifestyle by each passing day and host you for a ‘better tomorrow’.

Registration
Fill up the form below to avail the offer